Many people with ME have problems with additives found in foods, with the flavour enhancer monosodium glutamate often being a particular problem, and it is not always easy to work out which foods contain MSG. I have found the following webpage which lists "hidden" sources of MSG very helpful, and other pages on the website contain much useful information - https://www.truthinlabeling.org/names.html

I make no apology for posting a few more photo's from Tim (my brother) and Lois's wedding, as follows - 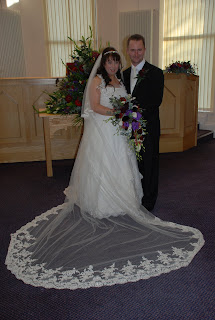 Tim and Lois at the church. This one shows the full extent of Lois's dress! 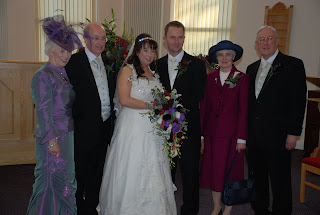 Still at the church, this shows Tim and Lois with both sets of parents. 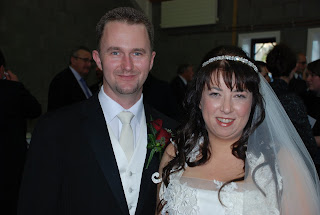 A close-up taken at the church. 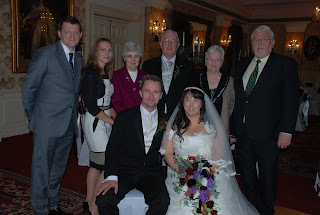 Tim and Lois with members of Dad's side of the family, taken at the reception. Back row: Gareth (cousin) and his wife Sarah; Mum and Dad; Rowena and Nigel (Dad's brother). 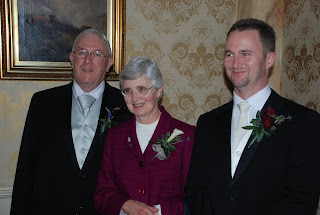 Dad, Mum and Tim, also at the reception.
Posted by Hazel at Tuesday, December 22, 2009 No comments:

Following on from the disappointment of the unsuccessful Judicial Review brought in February by two ME sufferers against NICE, this article by Margaret Williams contains statements that were provided by ME experts to the lawyers but which were sadly not used during the JR. They clearly provide further evidence that the usual recommendations of Graded Exercise Therapy and Cognitive Behavioural Therapy are at best unhelpful and can be positively harmful for those suffering from ME, a neurological disorder. To read the article click on http://www.meactionuk.org.uk/Statements-of-Concern-for-High-Court.htm
Posted by Hazel at Monday, December 14, 2009 No comments:

Tim (my brother) and Lois were married on Thursday 26th November. I was not well enough to be at the wedding, but was kept fully up-to-date with all that was going on via phone calls, text messages and email! I thought you might like to see the following lovely photos - 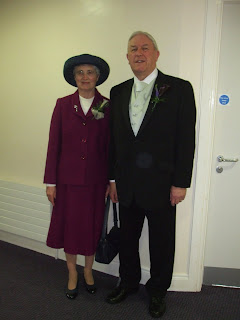 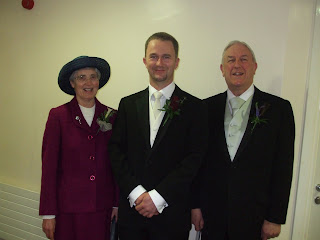 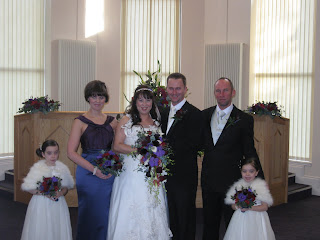 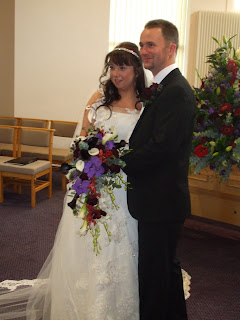 Lois and Tim at the church 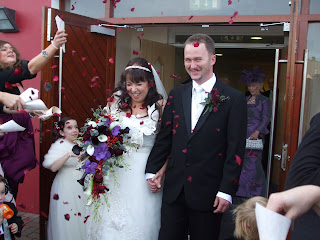 Tim and Lois leaving the church 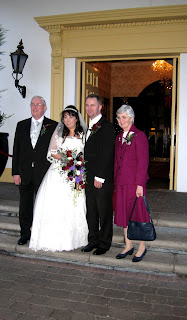 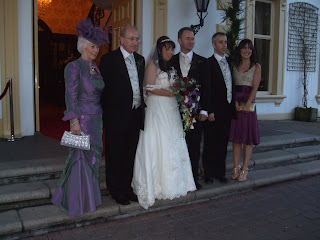 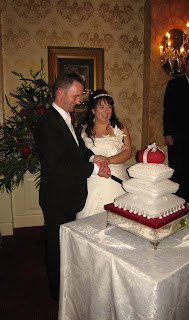 Tim and Lois cutting the cake 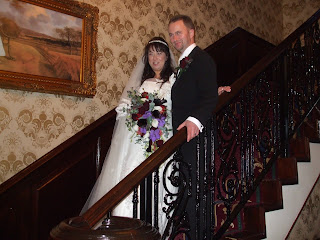 GET and CBT: potentially harmful for many patients with ME

"A review on Cognitive Behavioural Therapy (CBT) and Graded Exercise Therapy (GET) in Myalgic Encephalomyelitis (ME)/Chronic Fatigue Syndrome (CFS)" by Frank Twisk and Dr Michael Maes. This review shows that CBT/GET is not only ineffective and not evidence-based but also potentially harmful for many patients with ME/CFS. Click on the following link on the Invest in ME website for further details - http://www.investinme.org/Article-342%20CBT%20and%20GET%20Ineffective%20for%20ME.htm
Posted by Hazel at Monday, November 09, 2009 No comments: 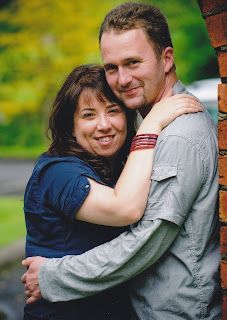 My brother, Tim, and his fiancee, Lois, are due to get married next month. This photo is one that they had taken to mark their engagement.

Retrovirus associated with ME

This encouraging research news has broken in the last 24 hours; apart from anything else, it further shows how mistaken it is to offer psychological "treatments" such as Graded Exercise Therapy and Cognitive Behavioural Therapy to those with ME!

There is a lot of information about the research available on the internet already, with links to many of the articles on the following website which states -

"News and scientific websites are publishing details of a groundbreaking scientific research study that for the first time links a normally dormant retrovirus called XMRV to patients with a diagnosis of Chronic Fatigue Syndrome or Myalgic Encephalomyelitis. This virus is also related to a subset of patients with Prostate Cancer. You can read an overview of XMRV in relation to CFS/ME here. "

Much of the research is linked with the Whittemore Peterson Institute (WPI) in the USA. Their press release, which includes the following, can be found at -

"RENO, NV – A recently identified retrovirus called XMRV has been linked to a debilitating neuroimmune disease that affects more than one million people in the United States.

"Scientists from the Whittemore Peterson Institute (WPI), located at the University of Nevada, Reno, and their collaborators from the National Cancer Institute and the Cleveland Clinic, have discovered a retroviral link to Myalgic Encephalomyelitis/Chronic Fatigue Syndrome (ME/CFS). "

"We have detected the retroviral infection XMRV is greater than 95% of the more than 200 ME/CFS, Fibromylagia, Atypical MS patients tested. The current working hypothesis is that XMRV infection of B, T, NK and other cells of the innate immune response causes the chronic inflammation and immune deficiency resulting in an inability to mount an effective immune response to opportunistic infections.

"This discovery opens an entire new avenue of Neuro-Immune Disease related research and our discovery has brought to this field world-renown immunologists and retrovirologists building our team of collaborators to translate our discoveries into new treatments as soon as possible.

"Because retroviruses are known to cause inflammatory diseases, neurological disease immune deficiency and cancer the discovery of XMRV has far reaching implications for the prevention and treatment of not only lymphoma, one of the potentially devastating complications of ME/CFS but prostate cancer and perhaps many others.

"As National Academy of Sciences member and expert retrovirologist, John Coffin wrote in the commentary accompanying our landmark publication in Science "One New Virus-How many Old Diseases". We look forward to translating this discovery into treatment options!"

The WPI has also put together a webpage of questions and answers about the research at: http://wpinstitute.org/xmrv/xmrv_qa.html One of the questions is as follows -

"Does this latest information prove once and for all that ME/CFS is not a psychological or psychosomatic illness as described by those who don't understand the disease?

"Absolutely! Actually, there are thousands of research articles showing the very real biological problems that ME/CFS patient's experience such as low NK cell count and function, MRI and SPEC scan changes, and repeated chronic infections, to mention just a few. Only the most stubborn and misinformed individuals refuse to believe that this disease is real and serious. The process of placing poorly understood illnesses into a psychological category is very similar to what happened in the early days of MS and epilepsy before the advent of technologies which proved the illnesses were "real." Unfortunately, many in the scientific and medical fields have not learned from their past mistakes."
Posted by Hazel at Friday, October 09, 2009 3 comments:

This is interesting, not only regarding autism, but also ME; there are quite a few of us whose ME was started by the Hepatitis B vaccine, as well as cases of multiple sclerosis, arthritis, and so on ...

03 Oct 2009
A new study in the leading scientific journal NeuroToxicology lends further credence to parents and scientists concerned about an increasingly aggressive childhood vaccine schedule and toxic vaccine components. A team led by researchers at the University of Pittsburgh found that infant macaque monkeys receiving a single Hepatitis B vaccine containing the mercury-based preservative thimerosal underwent significant delays in developing critical reflexes controlled by the brainstem. The infant macaques that did not receive vaccines developed normally.
Government vaccine guidelines were expanded in 1991 to include a Hepatitis B vaccine for infants within the first few days of life, even though the disease is primarily transmitted sexually or spread through the use of dirty needles. The introduction of the shot was part of a greatly accelerated vaccine schedule that coincides with the drastic increase in autism, which now affects one in 100 American children. Thimerosal was removed from U.S. Hepatitis B vaccines in 2000 but was not recalled from the market and was administered for approximately two more years. It still remains in other vaccines including all multi-dose shots for both the seasonal flu and H1N1 (i.e. swine flu).
Current government recommendations for seasonal flu and H1N1 call for pregnant women to receive both vaccines, and children as young as six months to receive as many as four separate flu shots. "This also doesn't take into account that nursing infants may be exposed to additional mercury through breastmilk should both mother and baby be vaccinated," says National Autism Association (NAA) board chair Lori McIlwain. "This study's outcome confirms that such an over-the-top toxic vaccine schedule is an assault on the developing brains of our children."
Specifically, the study found:
-- Thirteen newborn rhesus macaques were given a Hepatitis B vaccine containing a standardized dose of thimerosal adjusted for their weight, four received a saline placebo, and three were not given any shots.
-- Vaccinated animals experienced a significant delay in the acquisition of three survival reflexes compared to unvaccinated animals. Root, snout, and suck reflexes, critical to animal survival in the wild, were delayed in the vaccinated macaques.
-- These reflexes are controlled by the brainstem, a vital part of the brain that regulates automatic functions such as breathing, heart rate, and intestinal activity.v

-- Neonatal responses in unvaccinated control animals were not delayed.
-- The delay in acquisition of three of the four survival reflexes was not contingent on birth weight or gestational age.
For years, parents of children with autism have lobbied government health agencies to conduct research comparing the health of vaccinated children to that of unvaccinated children, and to remove thimerosal from all vaccines. Neither request has been met.
"This study underscores the lack of appropriate government action to ensure the safety of vaccines. Had our government agencies conducted the most basic research on the implications to children's health from the vaccines they rigorously promote, they could have spared thousands of children the neurological injuries they endure today," said Ms. McIlwain. "It's shameful."
Source: National Autism Association

The European Society for ME

European Society for ME - http://www.esme-eu.com/

Set up earlier this year, the Mission of European Society for ME states:

"Our mission is to create a Think Tank where top scientists from relevant fields can discuss current ME knowledge in order to determine the most crucial direction of future research, and to provide a reliable source of cutting-edge ME information that ESME will incorporate in the education of medical professionals."

"ME/CFS (Myalgic Encephalomyelitis/Chronic Fatigue Syndrome) is a physical disease. It is not a product of the patients’ imagination and is not a psychological problem. Funds have been used for research into the hypothetical psychiatric nature of the disease at the expense of biomedical research. Future research needs to be interdisciplinary and focused on the causes, early diagnosis and treatment of ME/CFS.

"The British National Health Service has published NICE guidelines for this disorder which, according to ESME, are not helpful and might even induce relapse in some cases.

"ESME will encourage research leading to the accumulation of new knowledge and to a better understanding of the disease, and will endeavour to raise funding for biomedical research in, and education about, ME/CFS."
Posted by Hazel at Friday, October 02, 2009 No comments:

Welcome to my On Eagle's Wings blog! Having enjoyed reading a few blogs online, I thought that it was about time that I tried one myself.
I have been badly affected by ME and unable to work since 1991 (see my website at www.oneagleswings.me.uk for further information about ME); being housebound I use both email and the internet quite a bit.
I hope to use this blog for posting about family news, interesting events that I hear about, and so on - I guess time will tell!
Posted by Hazel at Monday, September 14, 2009 No comments:

Hope beyond the Coronavirus by Roger Carswell, Evangelist, Yorkshire, UK.

A Christian Perspective on ME

Looking Back With ME

Servants Of The Lord

Servants Of The Lord - Brief accounts of the lives of some eminent Christians of past days by Roger Jack (1922-2014), Welcome Hall Evangelical Church, Catshill. Highly recommended!

What Is A Christian?

The Gospel we preach - What is a Christian?

Also by the same author -

What Various Hindrances We Meet

Hope Deferred But Not Denied

He Careth For You

No Faith? Our Struggle With Unbelief

How Can I Help Someone With Severe M.E.?

A catalogue containing all of the articles on ME by Margaret Williams and Professor Malcolm Hooper from 1986 - the present can be found at - www.margaretwilliams.me

To see photo's of Tim and Lois's wedding, please click on

Hazel
I am a Christian, saved by grace alone through faith alone. I have had the neuroimmune disorder ME, Myalgic Encephalomyelitis, since 1991. From North Somerset, now in N. Ireland. Please see my website for further information about ME.