MILLIONS MISSING : "WHAT ARE YOU DOING AT THE WEEKEND?"

By Jane Colby, Executive Director of The TYMES Trust

What? How do I answer that?

Was it a well meaning friend who just said it, or a slight acquaintance? A relation, or simply someone you're still in contact with despite the limitations - and isolation - of ME?

Being well meaning, and understanding your life, are two different things aren't they?

Of course if it was me asking you "What are you doing in the weekend" I could get away with it. I would mean, are you going to get out of bed? Are you making an ambitious plan to wash your hair and maybe sit in the garden? And you would know I meant that. We ME people are on the inside track, as it were, and won't be expecting "I'm going to a music festival" or "I'm playing tennis" or even "I'm going shopping" or one of the  myriad of "normal" things that people from the Rest of The World do on any weekend.

So what would a member of the Rest of The World expect you to answer? Something along the lines of "I'm going to the sales/cinema/shops/theatre/visit my cousin at the other end of the country/take the dog to the zoo" perhaps.

Being asked about the weekend always brings me up short. Suddenly finding that all those careful explanations of pacing yourself have apparently fallen on deaf ears can be disheartening. What it does is make you painfully aware just how hard it is for others to grasp the reality of your life. And that pretty much applies at all stages of ME, but particularly when you seem to be over the worst (you wondered if you ever would be) and are usually dressed when they see you.

Seeing's believing, as I often say. People see you when you're actually doing something, using your stored energy all up. You look fine. Later, you don't. And they don't see that.

It goes something like this. Your cleaner and good friend turns up with all the amazing energy of a well nourished tiger. She heaves the hoover about, goes up and downstairs, wipes and dusts and washes, while you're occupied getting over the effort of tidying up beforehand. You drink tea, sit with your feet up, and hope things will all get done as you'd like. If you're no longer severely ill, and therefore not bedridden, you look comparatively normal. You're making an effort to exchange pleasantries, and she's known you for quite some time, so you assume that your life is fairly well understood.

And then comes the bombshell. She's leaving the house and she says, chattily, "What are you doing at the weekend?" Where to start? She may as well have said "Are you flying to the moon on Saturday?" Turns out she really IS going to a music festival.

It's not that you don't EVER go ANYWHERE, and it's not that you wouldn't like to go SOMEWHERE. As and when your ME will let you, of course. It's that you would never, ever, go on a Saturday, when all the world is abroad, competing for parking, jostling and queuing and filling up the coffee shops. And you would certainly not choose a bank holiday. It would be a quiet day midweek, a day when the world is otherwise engaged.

"What are you doing at the weekend?" A gulf just opened up between your lives the size of a chasm.

The Biomedical Research into ME Colloquium 6 (BRMEC6) takes place in London over two days from 1st - 2nd June 2016.

This will be the sixth Invest in ME research Colloquium and we hope to emulate last year's successful meeting which brought together top researchers from thirteen countries to discuss research, strategies and future planning.

The fifth colloquium built on past years and has now evolved into a major international event, with CPD accreditation, and involving the most experienced researchers in areas such as immunology, virology, neurology and bioinformatics.

Chairing and participating in the meeting will be the Invest in ME Research Advisory Board and the newly formed European ME Research Group (EMERG).

We again have most of the main biomedical research initiatives now occurring throughout the world represented at the meeting.

The research colloquium is a workshop environment for active and potential ME researchers and is by invitation only. However, the charity welcomes applications from researchers interested in increasing the knowledge and research into ME.

If you are a researcher and are interested in attending the BRMEC* Colloquiums then please use our contact form to discuss this -
http://www.investinme.eu/BRMEC%20Colloquiums.shtml#ContactUs

The deeper things of life are so easily crowded out today. Here at the Metropolitan Tabernacle we cater for the needs of the soul. Permit me, as a pastor for many years, to plead with you not to let the ultimate meaning and purpose of life pass you by. True fulfilment and happiness depends on knowing who we are, and knowing the Lord, our Creator. Don't let yourself be swept away, programmed and ruled by the shallow things of materialism and hedonism. We need Him and one day we must give account to Him.

We've presented a collection of material here to help you. Do investigate the facts of the faith, and the possibility of walking with God.

In your acknowledgement of my letter of 15th April 2016 to Dr Richard Horton, you write: “We have received, considered and discussed your letter.  We recognise that scientific findings can be a matter for debate, but disagreement, however intense, is not grounds for retraction of an article”.

In the light of the extensive international criticism of the PACE trial, I regard this as an unsatisfactory reply and ask you to reconsider.

My letter calling once again for a retraction of the PACE article is not about a “disagreement”: it is a critique alerting editors of The Lancet to basic errors of fact and to misuse of statistics by the PACE PIs.

The article you published in The Lancet in 2011 promotes the use of a non-effective intervention. You will recall that one of the PACE PIs, Professor Michael Sharpe, conceded this on 18th April 2011 when he said on air: “What this trial wasn't able to answer is how much better are these treatments than really not having very much treatment at all”.

There can be no doubt that the PACE trial did not fulfil its objective, which was to demonstrate the effectiveness of CBT/GET in “curing” ME, and that (as confirmed on 26th March 2016 by Rebecca Goldin, Director of STATS.org and Professor of Mathematical Sciences at George Mason University in Fairfax, Virginia): “flaws in this design were enough to doom its results from the start” (http://www.stats.org/pace-research-sparked-patient-rebellion-challenged-medicine/).

The many flaws were pointed out to you in my formal complaint of 28th March 2011: some of these were that the entry requirements and the primary outcome thresholds were changed after the trial had begun; it failed to report on its primary outcome measures as set out in the protocol; PIs relied upon the subjective reports of participants because the use of actometers was dropped and the few remaining objective measures of function failed to demonstrate any benefit from the PIs’ favoured interventions; there was an absence of blinding; it was not, as advertised, a randomised controlled trial -- there was no control group, and participants were not made aware of the conflicting interests of the investigators; astonishingly, it was possible for a participant to leave the trial with a lower physical function score and a higher fatigue score than their entry score, but still be classed as “recovered”.

That is a travesty of science, a tragedy for patients and is tantamount to fraud.

The accompanying Comment by Bleijenberg and Knoop (approved before publication by the Chief PI Professor Peter White) erroneously claimed a 30% recovery rate but, even though one of your senior editors promised it would be removed, the error remains uncorrected.

For the last five years the PACE study has been totally discredited by the international community of scientists: for the selective results you published to remain in the literature to be quoted uncritically by others continues to risk more iatrogenic harm.

To read the rest of the article, please go to --

Hope 4 ME & Fibro Northern Ireland are organizing this conference "Chasing Competent Care" as part of a campaign to improve medical care for thousands of ME and fibromyalgia patients in Northern Ireland.

Dr Joe McVeigh, Researcher at University of Ulster - The Exercise Dilemma with Fibromyalgia

Professor Malcolm Hooper - A Review of the PACE Trial 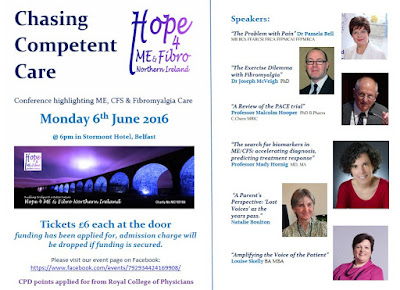 A Christian Perspective on ME

Looking Back With ME

Servants Of The Lord

Servants Of The Lord - Brief accounts of the lives of some eminent Christians of past days by Roger Jack (1922-2014), Welcome Hall Evangelical Church, Catshill. Highly recommended!

What Is A Christian?

The Gospel we preach - What is a Christian?

Also by the same author -

What Various Hindrances We Meet

Hope Deferred But Not Denied

He Careth For You

No Faith? Our Struggle With Unbelief

How Can I Help Someone With Severe M.E.?

A catalogue containing all of the articles on ME by Margaret Williams and Professor Malcolm Hooper from 1986 - the present can be found at - www.margaretwilliams.me

To see photo's of Tim and Lois's wedding, please click on

Hazel
I am a Christian, saved by grace alone through faith alone. I have had the neuroimmune disorder ME, Myalgic Encephalomyelitis, since 1991. From North Somerset, now in N. Ireland. Please see my website for further information about ME.